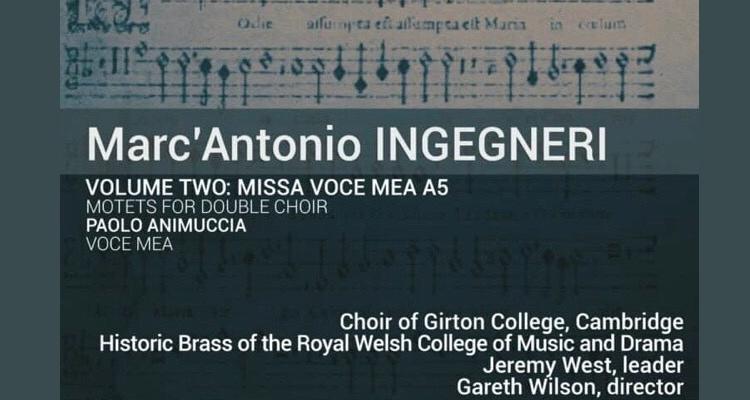 In July 2021, the Choir recorded the music of Marc’Antonio Ingegneri, who lived and worked in Italy from 1535-1592. Directed by Director of Chapel Music, Gareth Wilson. It also features Historic Brass of the Royal Welsh College of Music, led by Musician in Residence, Jeremy West.

Marc’Antonio Ingegneri is famous for having taught Claudio Monteverdi, probably the most celebrated composer of the early 17th century, but his own music is incredible and deserves to be better known. It’s also known that he was Director of Music at Cremona Cathedral whose bishop was a leading light in promoting liturgical reform at the Council of Trent in the sixteenth century. Ingegneri was at the forefront of the implementing of these reforms and may therefore be more important to the history of music than has yet been recognised.

The Choir performed Ingegneri’s music at Cremona Cathedral back in 2019, and then went on to record a first volume of his music. Which reached the Top 10 in the Classical Charts and was nominated for an International Classical Music Award.

You can listen and purchase the new album via this link: https://listn.fm/ingegneriv2/

Below are two short promotional videos, which we hope that you will enjoy.