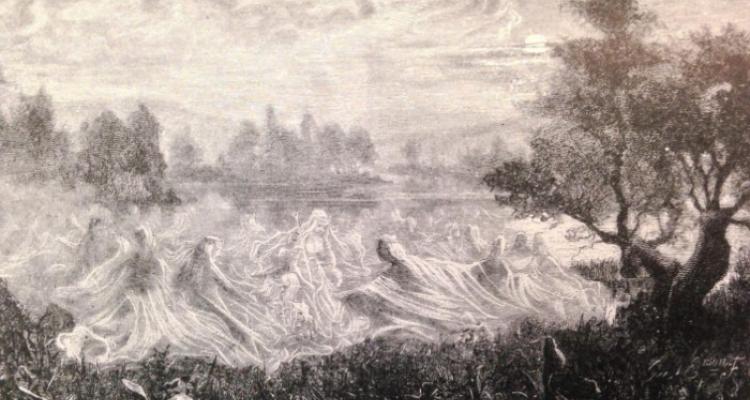 Girton College Library’s Special Collections contain a wonderful selection of books which touch on the vibrant world of folklore and myth in Scandinavia.

The Land of the Midnight Sun,written by the explorer Paul du Chaillu in 1881 and now held in the Travel Collection, which is one of the Library’s Special Collections. Paul du Chaillu describes the elves, fairies and dwarves that populate Scandinavian folktales. He writes about the ‘Elfdans –  a dance of the elves… In old times the people said that this dance always took place over the spots where good people had been buried, and where their spirits dwelt’.

This book was presented to the College in 1919 by Gwendolen Crewdson, a student from 1894 to 1898, and later a staff member, who served as Librarian (1900-02) and then Junior Bursar (1902-05). Gwendolen was also the niece of Alfred Waterhouse, the architect who designed many of the College’s early buildings. She gave her name to Crewdson Field, the College sports grounds next to the Girton Road, which she purchased in order to prevent it from being built on.

Fridtjov Nansen, a Norwegian explorer and Nobel Peace Prize laureate, wrote an account of his travels in Scandinavia, In Northern Mists: Arctic Exploration in Early Times, which is filled with myths from the lands he visited. It waspublished in 1911 andis held in the Travel Collection. His writing is brought to life by small woodcuts such as those shown below:

Many of the books in the Library’s Special Collections about Scandinavian myth and folklore originally belonged to Dame Bertha Surtees Phillpotts, a student of the College (1898-1902), Librarian (1906-09), and later Mistress of Girton (1922-25) and University Lecturer in Scandinavian Studies (1926-32). She travelled to Iceland in particular many times and gathered a collection of books and pamphlets about the country, which she bequeathed  to Girton and which now form a special collection in their own right, the Newall Collection.

One of the volumes that belonged to Dame Bertha was Iceland: its Scenes and its Sagas by Sabine Baring-Gould (1834-1924), an Anglican vicar and scholar, published in 1863. The book illustrates Iceland’s mythic history through retellings of the sagas. His words are enlivened by copies of watercolours by Sabine Baring-Gould himself, such as the picture of Grettir’s Saga below:

Another book bequeathed by Dame Bertha was Icelandic Pictures Drawn with Pen and Pencil, written by Frederick W. W. Howell – a traveller and early photographer of Iceland. It was published in 1893 and is now in the Library’s Travel Collection. The work is filled with a wonderful series of sketches of Iceland’s landscape, history and mythology, including this lovely illustration of a Viking ship sailing above the text of Chapter 1:

Also in the Travel Collection is Pen and Pencil Sketches of Faröe and Iceland by Andrew Symington, published in 1862. It contains a section of short narratives drawn from Faeroese and Icelandic folklore, such as ‘The Goblin and the Cowherd’ and ‘The Goblin’s Whistle’. The book is illustrated throughout with exquisite wood-cuts by W. J. Linton, such as the one accompanying the title page shown below:

A northerly world of fairies, goblins, heroes and adventure awaits on the shelves of Girton Library’s Special Collections.