Glimpses of Girton: Literary annuals in the Library 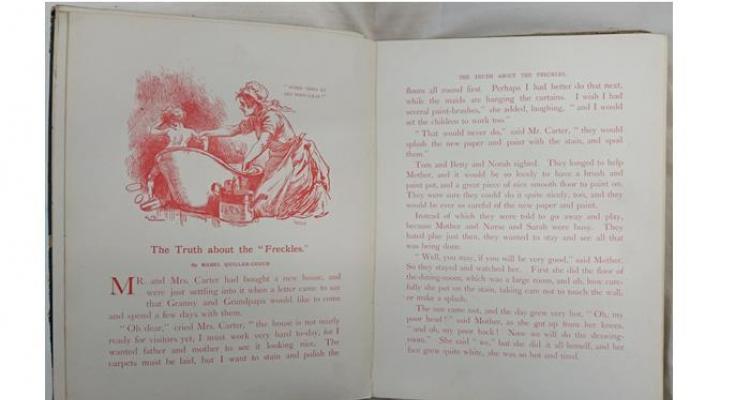 The “annual” has been a staple of Christmas stockings for generations, with a history dating back to the 1820s. Even before the end of the nineteenth century, the genre was sufficiently well-established to provoke discussions of its history; for example, Arthur T. Pask’s article, “The evolution of Christmas annuals”, in the July 1895 issue of The Windsor magazine: an illustrated monthly for men and women.

Within the Library, the Gamble collection – at the core of which are the books bequeathed to the College by Jane Catherine Gamble in 1885 – has been augmented over the years by donations of books illustrating the reading of women of that period, including a number of annuals aimed at both children and adults. One of the U.K.’s earliest annuals was Forget me not, published by Rudolph Ackermann and edited by Frederic Shoberl. We are lucky to have three volumes, from 1832, 1834 and 1842.

As can be seen, the earlier volumes were beautifully produced, fairly diminutive at under 16 cm in height, and clearly intended to be bought as gifts. (Arthur R. Pask describes his 1825 volume thus: “Now this book is remarkably well bound in red silk; the letterpress is neatly printed; the steel engravings are of a far higher and more artistic character than any that have been since produced in a similar fashion.”)

By 1842 and the 20th volume, however, the high standards of binding and engraving had to be dropped, although the preface makes clear that “in spite, however, of all fluctuations and vicissitudes… it shall be my strenuous endeavour… to uphold the character which it early acquired – that of being, in point of literary merit, as in age, the first of the Annuals.”

From just three years later we hold a single volume (the seventh, according to the preface) of Peter Parlay’s annual: a Christmas and New Year’s present for young people. At a chubby 14.5 cm high it is certainly child-sized and contains a mixture of factual articles and didactic fiction, with numerous black and white illustrations.

Moving on about 20 years, we have Warne’s home annual: a collection of original stories, games and amusements. Its content – with stories, puzzles and games, all illustrated with black and white images in the text as well as black and white plates – helps make it feel more modern. It includes articles by famous authors, including Charlotte Mary Yonge, whose contribution is listed in the contents as: Harvest home in Normandy (with Illustrations), Unpublished Tale, translated by the author of the “Heir of Redclyffe” from “Mde De Witt” (née Guizot).

Periodicals that didn’t produce an annual could still bring out a special Christmas issue. Two examples are bound with our volume of Warne’s home annual.

Also aimed at children, but perhaps appearing more plain to modern eyes, is our collection of Aunt Judy’s Christmas volumes from the 1860s-1880s. These annuals contained reprinted items from the monthly Aunt Judy’s magazine, which was founded in 1866 by the children’s writer Margaret Gatty and continued by her daughter, Juliana Horatia Ewing. Contributors over the years included Rudyard Kipling, Lewis Carroll and Hans Christian Andersen. The 1868 annual was reviewed in The British quarterly review of January 1869, which described it as “one of the brightest and most graceful of our annuals for juveniles.”

Within the Blackburn Collection, the 1903 bequest of Helen Blackburn’s “memorial library” of material relating the worldwide position of women in the nineteenth century, is the first (and only?) volume of the Pioneer’s Xmas annual. The Pioneer Club was a London club founded for women of all classes who were interested in the advancement and enlightenment of women – although presumably only for those women who could afford the annual membership fee of 2 guineas, which might be almost a month’s wages for a female worker in a textile factory – by the social worker and temperance campaigner Emily Massingberd.

From the early 20th century is our volume of The Empire annual for girls. It features the usual combination of factual articles and fiction, this time illustrated with plates in both black & white and colour. Among these is an article entitled “A day in my life at Girton” by A. Cunningham – probably Audrey Cunningham, an historian who was a student at Girton from 1900 to 1903. The article runs to six pages and comes complete with a plate showing two student rooms!

Two of the more modern annuals in the collection are from the same publisher: The infants’ magazine (1905) and Partridge’s children’s annual. Both include stories by Mabel Quiller-Couch, a well-known children’s author of her time and younger sister of the literary critic Arthur Quiller-Couch. The writing in both volumes tends to have a very moralising tone, with many items on the theme of the boy who cried wolf, but they share a mixture of poetry and prose and wide range of styles of illustration, although a penchant for cats is more noticeable in The infants’ magazine. Our volume of Partridge’s children’s annual is clearly much loved (or, at least, much used) but the lack of a title page makes it harder to date. The title was published between 1909 and 1935 and the bright printing of this volume vividly demonstrates the evolution of the genre from its early days in the mid-1800s to annual of today.