Glimpses of Girton: Girton College and the Campaign for Women’s Suffrage 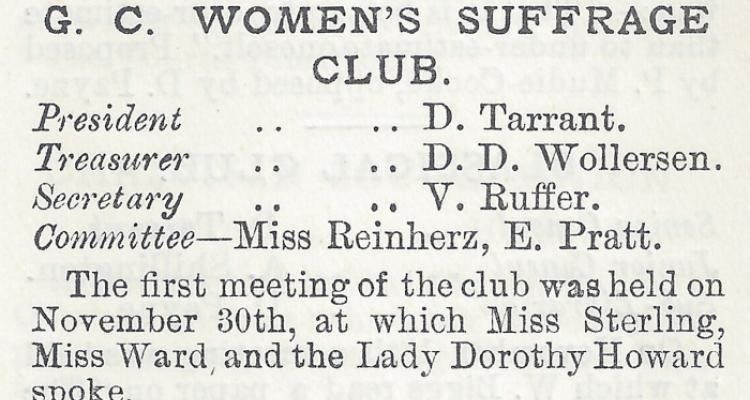 This year marks the centenary of The Representation of the People Act of 1918, which gave the national vote to women over 30 who met a property qualification, or who were married to male rate payers. The 1918 Act was the culmination of many decades of campaigning by both men and women. The histories of the British campaign for women’s suffrage and of Girton College – the first residential institution offering university-level education for women – are closely connected.

The British campaign for women’s right to vote was very active in the 1860s. A key event took place in 1866 when two of Girton’s founders, Emily Davies (1830—1921, later Mistress of Girton, 1872—1875) and Barbara Bodichon (1827—1891), among other notable women, helped to draw up a petition to be presented in Parliament asking that women who met the property qualifications required of men should be included in the national electorate. They gathered 1,499 signatures. On 7 June 1866, Emily Davies and Elizabeth Garrett (1836—1917) took the petition to the House of Commons to give to J. S. Mill (1806—1873), MP for Westminster and a supporter of women’s suffrage. Printed copies of the petition were also made and given to certain newspapers and individuals, including members of both the House of Commons and the House of Lords. Two of the four known printed copies of the petition are held in Girton College – one in the Blackburn Collection in the Library (classmark: Blackburn 396.6 W84), and one in Emily Davies’ papers in the Archive (archive reference: GCPP Davies 17/51).

Activities in support of women’s suffrage quietened in the 1870s and 1880s. But with the approach of the new century came renewed momentum. New leaders and organisations emerged; memberships of older suffrage societies grew; some groups – the suffragettes – adopted more militant tactics and many provincial towns witnessed the birth of suffrage associations. By the time of the General Election of 1906, the campaign was one of the prevailing topics and was avidly reported in the national press. A number of Girtonians felt that the time was ripe for the foundation of a Girton College suffrage society: the Girton College Women’s Suffrage Club was in existence from Michaelmas Term 1907 until the end of the Lent Term of 1916. The inaugural meeting of the Club, was held in the College Dining Hall on 30 November 1907, suggesting a large turn-out. The Club was run by an annually renewed five-member committee led by a President and Secretary. A member of the resident College Staff (the fore-runners of today’s Fellows) was always on the Committee. The first staff member was Helene Reinherz (1875—1947), a former student, and Resident Junior Bursar, who was succeeded in 1914 by the young Director of Studies in History, Eileen Power (1889—1940). Students and former students became members of the Club, and after only one term that membership had reached 70. Its highest claimed number of members was 117 in March 1909 (when there were 152 students in residence).

The Girton College Suffrage Club organised a wide variety of events in and beyond College.  These included frequent speaker-meetings addressed by visitors from Cambridge and elsewhere, political discussions, concerts, plays, and ‘Polyglot recitals’, at which students hidden behind a screen delivered speeches in a foreign language while the paying audience tried to guess their identity. During regular ‘Special Effort Weeks’, volunteers offered tasks such as ‘skirt brushing’ and ‘hockey stick oiling’ in return for donations of a few pence. Other things on sale included the services of a ‘Shampoo Salon’ and ‘fortune-telling’ conducted in the Tower. Some years saw suffrage ‘Bazaars’, complete with stalls selling ‘fancy concoctions’, or advertising the services of a ‘veiled palmist’. The Club also subscribed to suffrage journals, placed on a special shelf in the Girton Reading Room alongside the ‘standard works on the suffrage movement’. Competitions to compose the best suffrage song, weekly ‘suffrage reading’ meetings, and a ‘detective competition’ in search of hidden items all attest to a very active, popular society that drew on the enthusiasm of many Girtonians. (Quotes taken from successive editions of The Girton Review, 1910—1915).

However, not everyone in Girton supported women’s suffrage. The College authorities thought it best to keep ‘politics’ of this kind at a distance. Some students explicitly opposed the cause of votes for women. In November 1908, Miss Carey, Branch Organising Secretary of the Women’s National Anti-Suffrage League, spoke in College, and it was decided to form a Girton branch of that national organisation. The Girton College Anti-Suffrage League was in existence until Lent Term 1913, although it was less active in its later years. The first President was Rosemary Lubbock (Girton 1906), a third year reading Natural Sciences; the first Secretary, Eleanor Duckett (Girton 1908), a first-year Classicist. Unlike the Suffrage Club, no member of the College Staff was ever listed as a Committee member. By the end of 1909, the Girton League had 31 members. A subscription was taken out to ‘The Anti-Suffrage Review’ and copies were placed in the Reading Room. But the society’s main activity was to organise speaker meetings. One, held in February 1909, was addressed by the well-known novelist and anti-suffragist Mrs Humphrey Ward (Mary Augusta Ward) (1851—1920). Members of the Suffrage Club often attended these rival meetings, sometimes ‘blazing with red and white’ suffrage ‘badges’, and would raise their hands and voices with ‘numerous cries of “Question”’. (The Girton Review, Lent Term 1909).

In 1914, the Girton Suffrage Club followed the decision of the majority of suffrage associations nationwide, and announced that for the duration of the war it would put aside campaigning for the vote, and instead focus on ‘war relief work’ (The Girton Review, May Term 1914). From then until 1916, when the society ceased to exist, its activities were centred on talks about women’s work in wartime, and on raising money for relief work, in particular for the Girton and Newnham Unit of the Scottish Women’s Hospitals. These mobile hospitals, staffed by women volunteers, had been founded by a group of pioneering Scottish medical women and pre-war suffragists. The Girton and Newnham Unit, funding by money collected by the two College communities, was first sent to Troyes, in northern France, later to Macedonia. It helped hundreds of wounded soldiers, despite extremely challenging conditions. Several Girton women volunteered to serve in the Unit and in other hospitals close to the front. They included two pioneering doctors and suffrage campaigners, Mabel Hardie (Girton 1887) and Octavia Lewin (Girton 1888).

The war work undertaken so bravely and so determinedly by thousands of British women, including many Girtonians, added substantially to the case for women’s suffrage. This highly visible labour and sacrifice helped ensure that, in the 1918 Act, the right to vote was finally extended to large numbers of women.