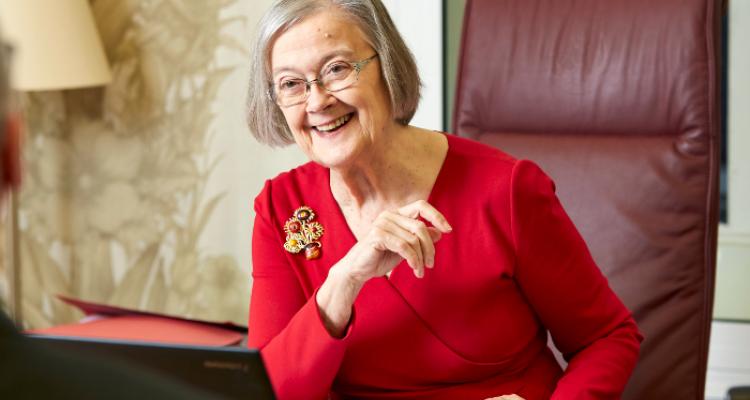 Confident, approachable, extremely clever, a pioneer, passionate about equality…and a wicked sense of humour. These are only some of the many qualities that people associate with Baroness Brenda Hale of Richmond, Girton’s Visitor. One of the College’s most distinguished alumnae, and a role model for women in law, she is currently the first female President of the Supreme Court of the United Kingdom. This, however, is only one of the many firsts in her life.

Brenda Hale was the first from her school to go to Cambridge, where she read Law, arriving at Girton in 1963. After having graduated with top honours, she started her career by teaching Law at Manchester University, also qualifying as a barrister and practising for a while at the Manchester Bar. Eventually, her academic specialisms were in family and social welfare law; she was indeed the founding editor of the Journal of Social Welfare and Family Law; she also co-authored a pioneering case book on ‘The Family, Law and Society’.

In 1984 she was the first woman to be appointed to the Law Commission, a body charged to keep the Law of England and Wales under review and to recommend reform where needed . Important legislation resulting from her work includes the Children Act 1989, the Family Law Act 1996, and the Mental Capacity Act 2005.

In 1994 Lady Hale became a High Court judge, the first to have made her career as an academic and public servant, rather than as a practising barrister.

In 1999 she was the second woman to be promoted to the Court of Appeal, before becoming the first female Law Lord. In October 2009 she became the first woman Justice of The Supreme Court. She is a Dame of the Order of the British Empire, a Fellow of the British Academy, and holds honorary doctorates from 27 Universities as well as Fellowship of the Royal College of Psychiatrists.

Baroness Hale is fully involved in the life of Girton as its fourth Visitor, succeeding Her Majesty Queen Elizabeth, the Queen Mother. An inspiring role model for Girton students, she is a champion for equality: for women, of course, but for all under-represented communities, whether because of their class, gender, sexual orientation or ethnic background. Her work and her life intertwine the law, the issues of the day, and the quest for a more equal society.

Lady Hale will be at the heart of Girton’s 150th Anniversary celebrations in 2019, delivering the Visitor’s Anniversary Lecture on Thursday 2 May 2019 (on the topic of ‘One hundred years of women in law’), presiding at the Anniversary Festival on 28-30 June 2019, and overseeing a year of truly extraordinary activity within and beyond the College.