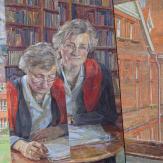 Social Anthropology and Past Mistress

Marilyn Strathern has the strongest possible Girton connections. Her mother, Joyce Evans was a Girtonian (Martin 1929) as was her daughter Barbara (1988). Marilyn herself came up to Girton in 1960 from Bromley High School to read Archaeology and Anthropology (MA 1967; PhD 1968). She was a College research student and J E Cairns scholar 1963–66 (working in Papua New Guinea) and Assistant Director of Studies in Archaeology and Anthropology 1967–68. She was a Bye-Fellow, a Senior Research Fellow and Fellow of the College 1976–84 and returned as a Professorial Fellow in 1993 before her election as Mistress five years later.

She has published widely on both Melanesia and the UK. Her research in Papua New Guinea includes gender relations, feminist scholarship and legal anthropology, and in the UK, kinship, the reproductive and genetic technologies, and audit culture. In addition to her Girton appointments, she has held posts as Assistant Curator, Museum of Archaeology and Ethnology, Cambridge (1966–68), as Research Fellow, New Guinea Research Unit, Australian National University (1970–72 in Australia and 1974–75 in Papua New Guinea), as Fellow and Lecturer, Trinity College, Cambridge (1984–85), as Professor of Social Anthropology, University of Manchester (1985–93) and as William Wyse Professor of Social Anthropology, University of Cambridge (1993–2008).

In 2001, Professor Strathern was created DBE. In addition, she has received numerous national and international awards which include membership of learned societies (FBA 1987), honorary degrees, and medals. It is inappropriate to list them here but mention should be made of the award of the Viking Fund Medal by the International Wenner-Gren Foundation in 2003, which recognised that through her research, mentoring and service to the profession she had achieved ‘high distinction’ and had ‘transformed the discipline’, and of the Huxley Memorial medal, bestowed by the Royal Anthropological Institute for lifetime achievement at the highest level.

Daphne Todd’s portrait won the 2001 Ondaatje Prize, awarded by the Royal Society of Portrait Painters to ‘the painter of the most distinguished portrait of the year’. The portrait was exhibited at the annual exhibition of the Society and then at the National Portrait Gallery before coming to hang permanently at Girton. It has generated a great deal of interest and gave rise to articles by both the artist and the sitter published in the THES (10 August 2001) and later in the Girton Annual Review 2002. Sitter, artist and portrait also featured on a Channel 4 programme on portraiture ‘In Your Face’ made by Bruno Wollheim for Coluga Pictures in 2002.