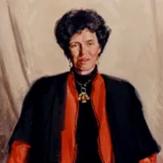 Juliet Campbell’s career before coming to Girton as Mistress was as a diplomat. After reading PPE at Oxford, she joined the Foreign Office straight away, eight years after the major reforms of 1949 which opened the Diplomatic Service to women, subject to a marriage bar. In 1961 she became a junior member of Edward Heath’s Common Market negotiating team. Despite the negative outcome of that early initiative, the European Community remained her speciality. She also held positions in Bangkok, The Hague, Paris and Jakarta and it was during this last posting that she married Alec Campbell, a historian, in 1983. In addition, she had a spell of duty running the FCO’s Training Department. The climax of her diplomatic career was the posting to Luxembourg as British Ambassador 1988–1991, a posting which she thoroughly enjoyed. Luxembourg’s EU Presidency in 1991 brought her a great deal of responsibility and many ministerial visitors.

As Mistress at Girton she was key in securing funding for the College. A donation from the Wolfson Foundation enabled an expansion of graduate accommodation at Wolfson Court. The extension also included the Poppy Jolowicz Law Library and other public rooms. The Duke of Edinburgh as Chancellor of the University, along with the Vice-Chancellor Sir David Williams and the Queen Mother opened the new building, named Queen Elizabeth Court. The Development Office came into being early in her term of office, with the appointment of the first Development Director. She was elected to the University Council and chaired the Committee which organised the 50th anniversary of women’s full membership of the University. Campbell Court, a paved court with planted borders which was formed as part of the Archive Building opened at Girton in 2004, is named after Juliet and Alex Campbell.