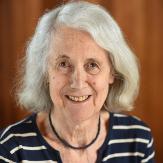 As a Reader in the Department of Applied Mathematics and Theoretical Physics (DAMTP), I lectured most of the first and second year applied maths courses, and also Part II General Relativity and Part III Quantum Field Theory.

In Girton, I supervised most of the first and second year applied maths courses, and also Part II courses on dynamics, quantum mechanics and general relativity. One of the most exciting aspects of teaching was when students saw the connections between what seem to be widely differing courses (e.g. the linear algebra basis of quantum mechanics).

I was a maths student at Girton in the Sixties, when it was a women’s college, and returned as a Research Fellow in 1974, becoming an Official Fellow and Director of Studies in Maths in 1976. This was the time when Girton decided to admit men; the transition started with male Fellows, then research students, then undergraduates, and went very smoothly. The College became a community where gender was not an issue, although it was very challenging to get a balance between men and women amongst the maths undergraduates. I retired in 2012, and am working on editing the memoirs of Lady Jeffreys, who was my Director of Studies and a major figure at Girton in the twentieth century.

As Director of Studies in Maths, I was involved in interviewing and selecting maths undergraduates, and then looking after them when they arrived (advising them about work, arranging their supervisions, writing references for them and being generally available to give help whenever needed). Contact with students was one of the most interesting parts of my job; it is endlessly fascinating to watch school-leavers turn into accomplished mathematicians.

I have always been especially concerned that women should not be deterred from reaching their potential as mathematicians. To this end, and encouraged by another former Girton mathematician, Dusa McDuff, I started the British Women in Mathematics Day, an annual event where young women from all over the UK meet to give talks about their research interests and to provide mutual support and encouragement.

I have also been Treasurer of the Cambridgeshire branch of the Royal Institution Mathematics Workshops, which runs Saturday morning sessions to foster the mathematical interest of local twelve- and thirteen-year olds. It is important to me that children realise that maths is not only intellectually stimulating, but also terrific fun! I have co-authored a book entitled “Flat and Curved Space-Times”, which endeavors to explain special and general relativity to a non-specialist readership.