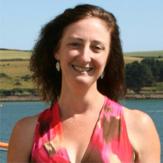 I worked for 12 years at the British Antarctic Survey on the evolution of the Antarctic continent over the last 200 million years. I worked on continental break up which left the Antarctic isolated over the South Pole and looked at how the continent has been affected by recent glacial cycles.

My specialism is in understanding sedimentary rocks and their environment of deposition to then look at large scale changes such as plate tectonics or climate evolution.

I also supervise third year mapping projects and am involved in masters projects in the fourth year.

I do a lot of public talks to schools and local groups about living and working in the Antarctic and understand the basic geological history of the continent.

Although I have been involved in teaching at the University since I was a PhD student I have only recently joined the fellowship and have found the college to be very warm and welcoming.