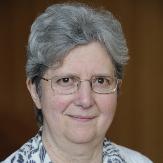 My research interests have ranged from transmissible drug resistance in bacteria (work that yielded the genetic evidence for the first transposon to be discovered), through mitochondrial genetics and a PhD in the control of the yeast cell cycle. Postdoctoral research in control of cell division in mammalian cells indicated the importance of cell death as well as cell division in the control of growth. After interludes as full time mother and as scientific and commercial computer programmer, I embarked on a second scientific career, thanks to the Daphne Jackson Trust and Lucy Cavendish College, in plant – insect interactions, working on the diversity of insects associated with bramble in the Department of Zoology, and on how bee cognition and colour perception influence the evolution of flower traits involved in attracting pollinators, within the Department of Plant Sciences.

I have supervised for Girton and other Colleges in IA Evolution & Behaviour, IA Physiology of Organisms, IA Biology of Cells, IB Ecology and IB Plant & Microbial Sciences, and I enjoy working with students to explore the connectedness of everything: how our knowledge of molecular biology can inform our understanding of ecology and whole organism biology, and how ecological and evolutionary principles can make sense of molecular mechanisms observed in the laboratory.