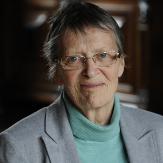 Before my retirement I specialised in Early Modern French literature (i.e. the 16th and 17th centuries). I have continued to work a little in this area: I contributed a chapter on C16 theatre to the Cambridge History of French Literature, and hope eventually to write a long-planned article on humour in the tragedies of Racine. Since retiring, I have also studied Ancient Greek (two years with the Open University) and refreshed my Latin by another two years of OU study. I have used the Greek to write English surtitles for a series of semi-staged productions in Ancient Greek directed by Professor Patrick Boyde (formerly the Serena Professor of Italian) over the last eight years. This started with a series of excerpts from the Odyssey, then moved on to tragedy (Oedipus at Colonus, Prometheus Bound, Ajax) and will shortly be reverting to Homer.

I also copy-edit the Girton College Annual Review, an interesting task from which I have drawn the conclusion that among the Fellows of Girton, the best writers of English are the scientists.