Scrapbooks and suffrage work: personal collecting and the campaign for the vote 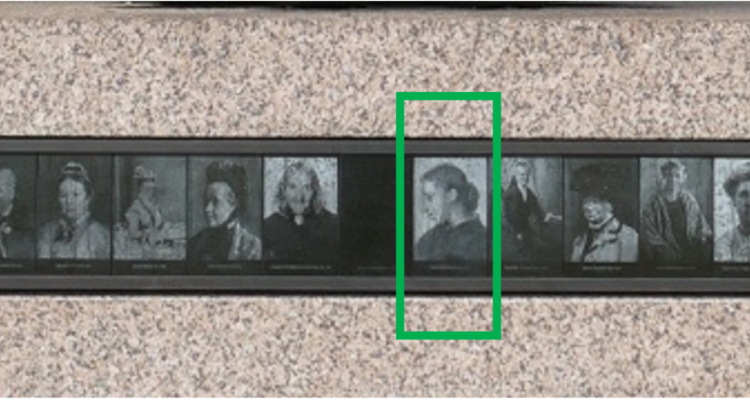 In 2018, the first statue of a woman in Parliament Square was unveiled to mark the centenary of #Vote100. Designed by Turner Prize-winning artist Gillian Wearing, the statue immortalises suffragist leader Millicent Fawcett holding a banner emblazoned with her words ‘Courage calls to courage everywhere’. This statue isn’t just one which pays homage to Fawcett, but several other prominent suffrage activists. One of these women, whose illustration is included on the plinth, is Helen Blackburn (1842-1903).

Helen Blackburn is pictured on the plinth. Source: Wiki Commons.

Helen Blackburn will be familiar to many in Girton College. Blackburn was a suffrage campaigner in the late-nineteenth century. She edited the feminist periodical The Englishwoman’s Review and carried out secretarial duties for regional and national suffrage organisations. She also penned several books, one of which was the first history of the suffrage movement. Despite her impressive campaigning history, she was in historian Linda Walker’s words, ‘personally diffident and self-effacing’. 1

As one of the first historians of the suffrage movement, it is unsurprising that Blackburn accumulated quite the collection of suffrage material during her lifetime. Blackburn bequeathed her collection of pamphlets, cuttings, and books to Girton College in 1903. She hoped that her collection would help the ‘few women who will look back through the years with interest and gratitude to the struggles of the early workers’. 2 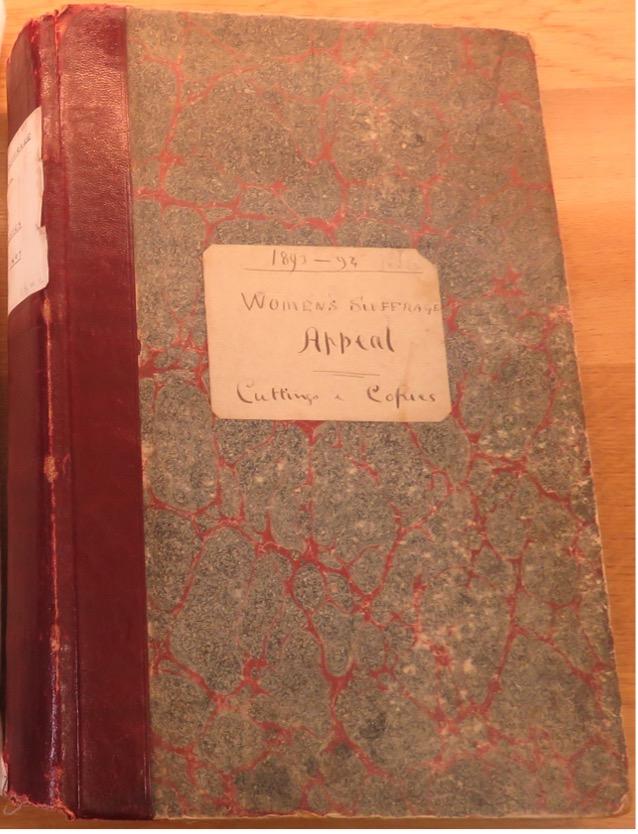 Buried within Blackburn’s collection is a 94-page scrapbook. This scrapbook, like other books in her collection, opens with a bookplate dedicating the volume to her cherished friends Lydia Becker (1827-1890) and Caroline Ashurst Biggs (1840-1889), leaders of the late-Victorian suffrage movement. 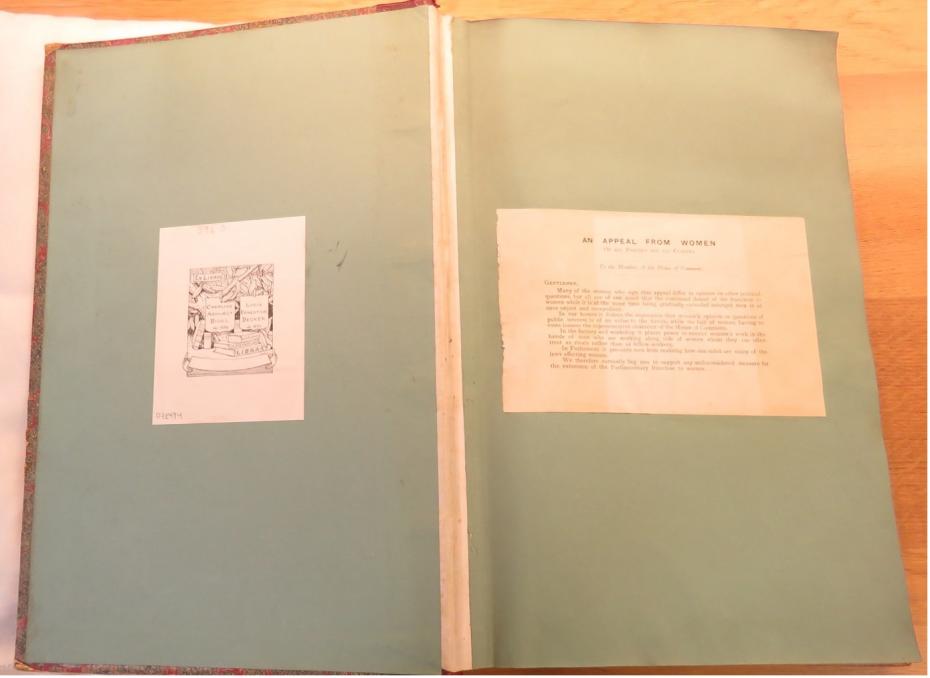 The subject of this scrapbook was an appeal, co-ordinated by the National Society for Women’s Suffrage, to encourage people to sign a petition in support of a woman’s right to vote. The final petition measured an astounding 50 feet in length and contained over 237,000 signatures on its pages. Though Parliament didn’t debate the petition, the appeal attracted significant new audiences to the suffrage cause.

We can certainly read this scrapbook for a history of the appeal relayed largely through newspaper clippings. But we can also use it to delve deeper into Blackburn’s specific contribution to the appeal. Unlike today’s quick signing of digital petitions, co-ordinating a Victorian petition campaign was quite the logistical feat – and one which Blackburn sought to preserve for posterity.

Towards the beginning of her green-paged scrapbook, Blackburn marked a newspaper clipping with two lines. The article reported on a meeting of the of the Women’s Co-Operative Guild in 1893 and how it was Blackburn who came up with idea for the campaign. In Blackburn’s own account of the appeal in her published history, she completely removes herself from the narrative of the campaign. Though we might see a simple marking of an article as an insignificant small gesture, it was in fact a rare occasion where Blackburn herself emphasised what she had specifically contributed to the movement. 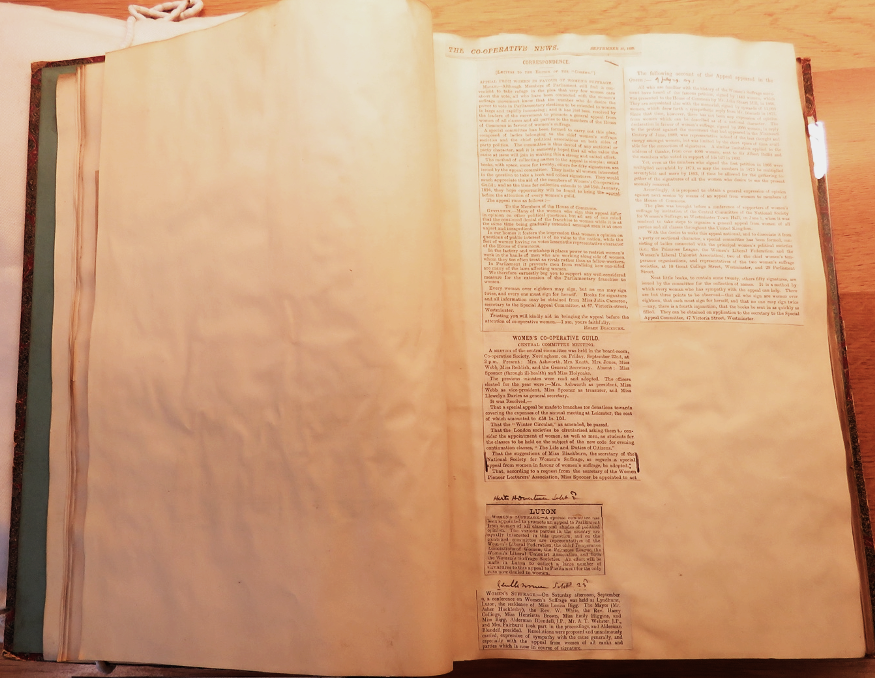 A page of Blackburn’s scrapbook showing an article reporting on her initial proposal for the Special Appeals petition campaign in 1893. Reference: Blackburn P396.3 (072474)

The scrapbook also testifies to Blackburn’s exceptional organisational abilities – of which we can imagine she was rightly proud. We find receipts of expenditure pasted next to a financial overview of the campaign, bringing together a list of donations. Another page hosts an original drawing capturing the presentation of the petition to Parliament drawn by a fellow committee member and later used in the Daily Graphic. Blackburn saw her scrapbook as a vital record of the administration of running a campaign, which pre-dated the proliferation of photography and more advanced printing techniques. 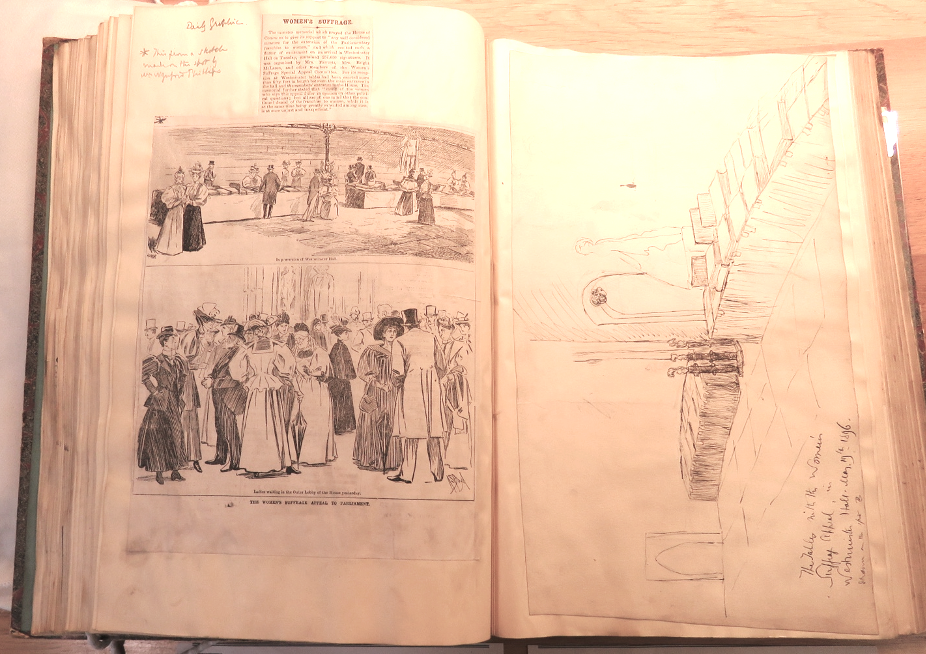 Blackburn's scrapbook documenting the presentation of the petition to the Houses of Parliament. Reference: Blackburn P396.3 (072474)

Blackburn’s collection is one of the earliest comprehensive collections on the suffrage campaign. This scrapbook was a bridge between offering a historical account of the movement, as well as a personal record of her own activities. It tells the story of her initial lightbulb moment to organise an appeal through to its later execution. It also testifies to Blackburn’s huge administrative efforts for the suffrage movement. Over 100 years later, Blackburn’s scrapbook is one of the few sources we can turn to see how she wanted future audiences – of more than just a ‘few women’ – to understand her work.

PhD student studying a history of scrapbooking in Britain from 1914-1980 at Churchill College, Cambridge.  She founded and runs the website www.womenslandarmy.co.uk.