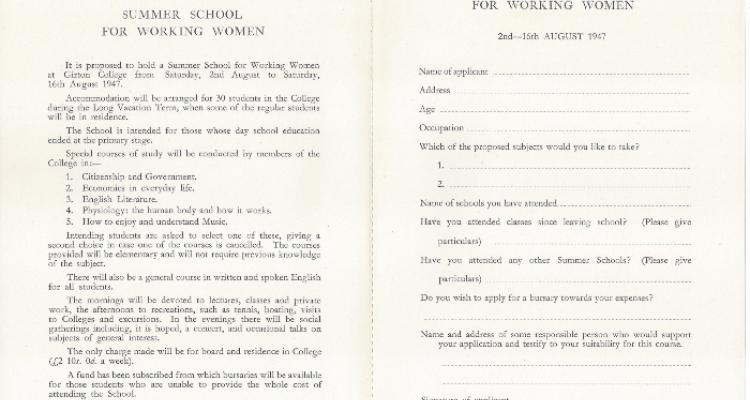 The Girton College Working Women’s Summer School (WWSS) was run for a fortnight in August in 1945 and 1947. Newnham College had run similar schools biennially since 1922 and had so many applications in 1944 that it was suggested that Girton might run a school in alternate years.

The WWSS aimed to provide, for women whose formal education had ended at the age of fourteen, an opportunity to fit themselves to enjoy more advanced work and to open the way to new interests and a wider outlook on life.

WWSS students were offered a range of subjects, all taught by members of Girton, including Citizenship and Government, the International Situation, Physiology, Music, English Literature, and Economics in Everyday Life. In addition, all had to take written and spoken English taught by, amongst others, Miss A. P. Pearce (1920-2006) [Philippa Pearce, later a writer of children’s books, including Tom’s Midnight Garden].

Each Summer School catered for around thirty women ranging in age from their late teens to their sixties. Enthusiasm for study was the main criterion for acceptance. Many were so keen to take up a fortnight of study at Girton that they gave up most or all of their precious annual leave to do so.

The occupations of WWSS participants included nursing, clerical work, factory work, housewives, secretaries, a hairdresser, a high speed wireless operator and a baker’s roundswoman. Although the two schools were advertised in exactly the same way (via employers, the Workers’ Educational Association, women’s organisations, factories, colleges for working women and hospitals), the largest group in 1947 were housewives. A report on the 1947 WWSS attributes this to the ‘return to more normal conditions’, presumably meaning the ending of many work opportunities for women after the end of the Second World War (reference: GCIP WWSS 1/2).

Members of the WWSS shared the life of those Girton students who were resident for the Long Vacation Term in all except their work. A notice posted on College boards for the 1947 school informs them of arrangements for post and telephone, times of bells and chapel services, and mealtimes, including ‘Elevenses’ in Old Hall (archive reference: GCIP WWSS 1/10).

As well as formal teaching, there was time for private reading and study and organised general activities and outings. These included concerts, theatre productions, a trip to Ely, lantern lectures, and tours of Cambridge colleges. Several of these activities were subsidised by members of Girton.

The 1945 WWSS was widely reported in the press, including an illustrated article in Picture Post, 29 September, entitled ‘What Mother Looks Like When She’s Learning’ (reference: GCIP WWSS 4/1). Margaret Freeman, one of the 1947 students, wrote up her experience in the form of a diary in ‘The Democrat’, quarterly publication of the Norfolk Workers’ Educational Association, describing herself as homesick for Girton on her return home (reference: GCIP WWSS 4/2).

As a serious experiment in adult education, it was felt that every participant gained something in knowledge from the WWSS and that the majority had foundations and inspiration on which to build future reading and learning. Many of the students sent letters of thanks after attending the school: most indicate as a minimum that they felt more self-confident and had more enjoyment from leisure hours, and some indicate their intention to progress into different and more challenging work (reference: GCIP WWSS 3/6/1-2). The 1947 students donated a magnolia tree by way of appreciation (reference: GCIP WWSS 1/2).

The committee recommended another school in 1949 ‘if persons could be found to take responsibility’ but the 1947 school was the last (archive reference: GCIP WWSS 1/1/3). The accounts remained open until 1956, but the remaining balance of £52 10s was then donated to Hillcroft College in Surrey, a residential college for working women with aims similar to those of the Girton WWSS.