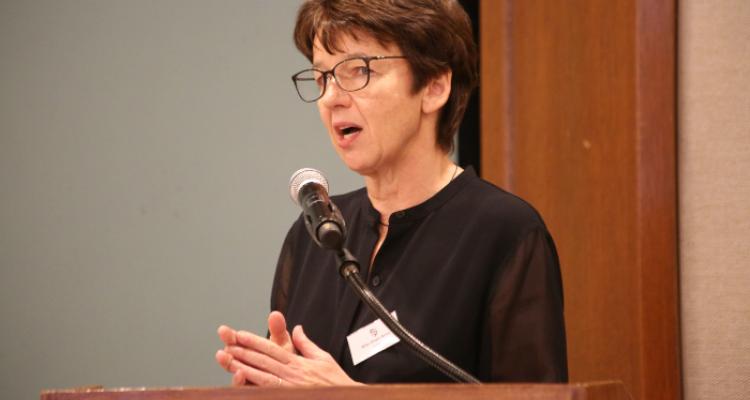 Dawn Airey is the CEO of Getty Images, which she joined after a distinguished career in UK media, which includes having been Chief Executive of Channel 5. An outspoken activist for women’s rights, a passionate northener, and a Old Girtonian, she chaired a panel on ‘Glass ceilings and sticky floors’ on women’s leadership in today’s business at the recent Girton New York International 150th Anniversary Symposium. Here an extract from her introduction:

In 2018  we have seen a shifting tide. People who abuse their positions of power, being held to account. And yes, this is predominantly men, because the glass ceiling built to keep us out of the boardroom has ensured there are more of you in those aforementioned positions of power. With hashtags like ‘time’s up’ dominating world headlines, it would be easy to assume the fight has been won and the playing field has been levelled.

2018 has been referred to as the year of the woman. But…I don’t buy it – we’re still underpaid, underrepresented and quite frankly, everywhere you turn there is a seemingly endless array of obstacles standing in the way of women achieving their best lives.

Despite great strides made by the international women’s rights movement over many years, there is no place on earth where women have as many opportunities as men. Nowhere at all. We are not living in a fair and equitable society and for females in poorer countries, this inequality tends to be amplified exponentially in the most harrowing of forms. Women and girls around the world are still married off as children or trafficked into sex slavery or forced labour. Women are refused access in many countries to education and political participation, or trapped in conflict-stricken countries where rape is merely a weapon of war.

The percentage of women in senior roles is declining globally. The simple fact is, in this very country, there are still more CEOs named John, than female CEOs overall.

In short, we all experience oppression in varying configurations and degrees of intensity. Certain groups of people have multi-layered facets in life that they must contend with. I am a lesbian, female CEO – two tags most won’t hold simultaneously. Only 6.4% of CEOs are women at S&P 500 companies, and for those females who do manage to progress up the ranks, they can expect to have their hard work recognised with inequitable pay – a minimum of 22 per cent less than their male counterparts. I’m not sure on the stat for lesbian CEOs, but I have openly been referred to in the UK press as Dyke, Zulu Dawn, Scary Airey and in the workplace, as the ‘see you next Tuesday’ at the table. Thankfully now it’s a different world – but only just.

That said, I do know that, statistically, I am in a lot better position because of the colour of my skin. A black man and a white woman make $0.74 and $0.78 to a white man’s dollar. But according to the U.S. Department of Labor, an African-American woman will make 64 per cent of that and for every dollar a white man makes, a Latina woman earns a meagre 56 cents.

If we zoom out to manager level positions overall, despite making up 46.9% of the workforce in the US, only a third of manager level positions are made up by women – despite being more educated overall. Of those female-held positions, only 4.1% are held by Latina women, 3.8% by black women and finally, Asian women hold just 2.4% of that third. In effect, the higher up the corporate ladder, the fewer the woman altogether, let alone women of colour.

Understanding what it means to live in an intersectional world is essential to combatting the interwoven prejudices people face in their daily lives, but getting a true grip on it is difficult. What is not ambiguous however is the growing amount of research that shows us that women leaders make things a hell of a lot better. We know that businesses are more profitable; governments are more stable; families stronger and communities are healthier.

So where to from here?

Intersectionality is still a relatively new term for the masses – and yet its message is one that surely any one of us can relate to. We must listen and include everyone in the overall debate – in all our multifaceted and experienced glory.