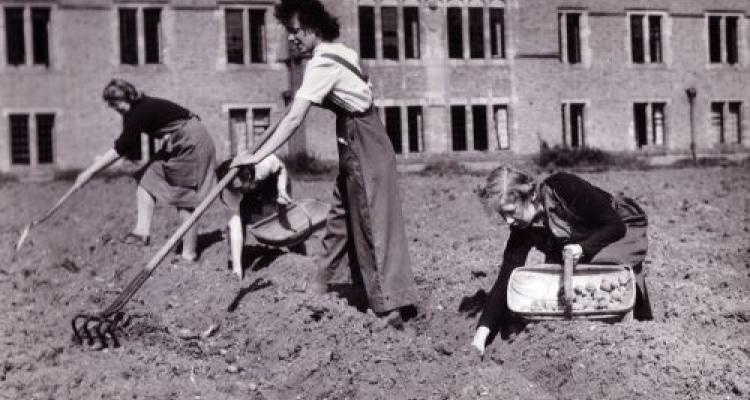 At 3pm on 8 May 1945, Prime Minister Winston Churchill announced that war in Europe had come to an end. Today marks 75 years since VE Day. World War 2 had ravaged continental Europe and beyond and not a corner of British life was left unaffected.

At Girton corridor windows were painted dark blue and blackout curtains were hung in student rooms. The grounds were turned over for the growing of vegetables and for keeping pigs. The College worked hard to become self-sufficient in vegetables and students volunteered both in the gardens and in the kitchens. Crops included onions, carrots, lettuce, cauliflower, celery and tomatoes, and vast numbers of potatoes, over 19 tons in 1941–1942.

During the war the College welcomed new residents who were either escaping danger or working for the war effort. In 1939–1940, Girton gave a new home to 56 women students and two staff evacuated from Queen Mary College in London until they found more spacious accommodation in Cambridge. In 1939 the Girton College Refugee Fund was established, which would help three Czech and German student refugees to attend College. It also supported the war-time residence of Dr Elsbeth Jaffé (1889–1971), a scholar from Germany. The Grange was occupied by the army during some of these years, and from 1943 Girton also provided a home for a small number of women of the Voluntary Aid Detachment [VADs].

In time students took a two-year degree under War Emergency Regulations, and many students and Fellows postponed study and research to help the war effort, providing valuable work that spanned the civil service, military, medical and scientific appointments and counter-intelligence. Alison Duke (1915–2005), who later became a Fellow in Classics at Girton, worked in Greece helping refugees, while Eva Hartree (1873–1947), a student in the 1890s and the first woman Mayor of Cambridge, helped support Jewish refugees in the city. One of the many bound by the Official Secrets Act, who rarely spoke of the war, was brilliant mathematician Mary Cartwright (1900-1998), Mistress of Girton from 1949 to 1968. Despite her important scientific contributions, above all to the effectiveness of radar, she modestly reported that her most useful war work had been packing parachutes for men sent into enemy territory. Baroness Platt of Writtle (1923–2015) was one of Britain’s first female aeronautical engineers, who went on to chair the Equal Opportunities Commission, her war work took her to the Hawker Aircraft Company where she was instrumental in developing fighter planes at the company’s experimental flight test department in Langley, Berkshire.

More than a dozen Girtonians worked at Bletchley Park, the top-secret British code-breaking establishment. Some paused their degrees to join the war-effort, others were recruited as graduates. The Official Secrets Act silenced Bletchley memories for many years, but in later life Girtonians would recall their work and lives in the Bletchley huts. Some were machine operators, setting and re-setting keys on replica German ‘enigma’ machines; others listened to enemy radio broadcasts, tapping out jumbles of words and starting the deciphering; others focussed on decoding and analysis. Some recalled periods of boredom, others fascinating work spliced by fear that a small error could risk lives. 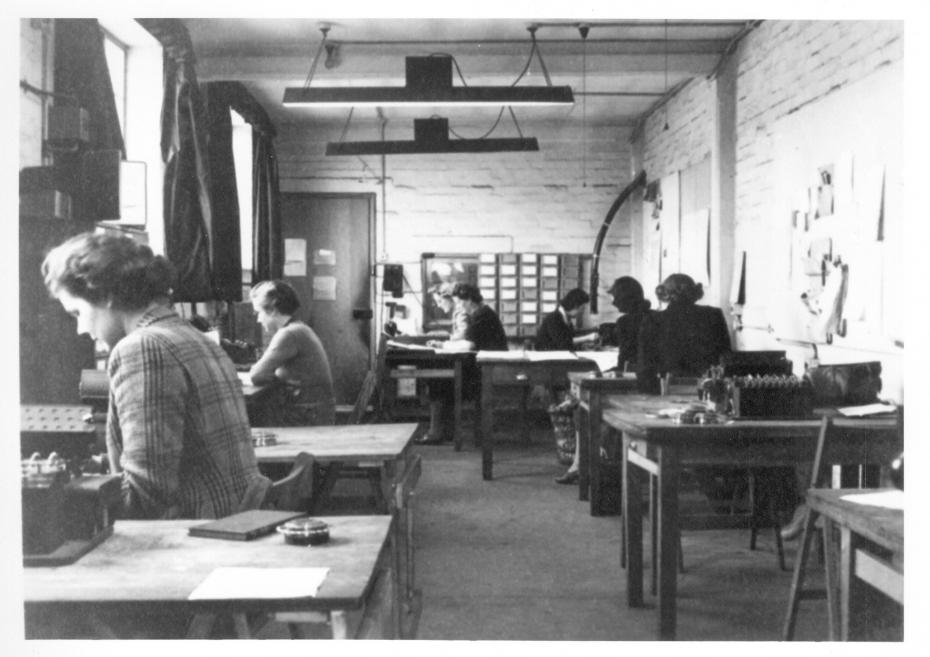 On this day the College recognises all those whose sacrifices and service led to VE Day. Thank you.