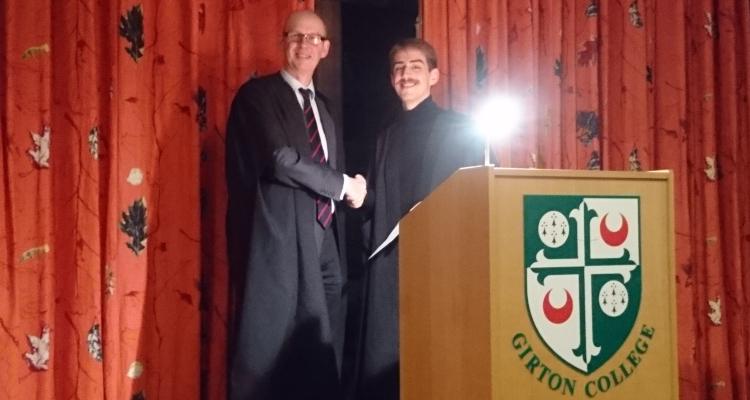 The annual Ridding Reading Prize took place in the Fellows’ Drawing Room on Monday 4 March 2019. The competition is a Girton tradition founded in honour of Caroline Mary Ridding, who won a scholarship to Girton to read Classics in 1883, and became a renowned Sanskrit and Pali scholar.

This year the Girton-based judges were Dr Emma Weisblatt, Dr Jill Jondorf, Professor Grevel Lindop, joined by guest adjudicator Mr Nicholas Porter. The external adjudicator was due to be Ms Christina Koning, Girton alumna and author of crime fiction, most recently End of Term, but unfortunately she was unable to take part and was much missed. The panel were most grateful to Nicholas  for stepping in as external adjudicator at the last moment.

Four of the five readings were by Girtonian authors: in the first round the contestants read an extract from This is the life: a novel  by Joseph O’Neill, a current and well-known barrister-turned-novelist, and the poem “Seen in a Glass”, by Kathleen Raine, who studied natural sciences at Girton in the 1920s and was a renowned scholar of W. B. Yeats and William Blake. The prose extract was a light-hearted illustration of the relationship between barrister and pupil. All the contestants read the passage with enjoyment, energy and engagement. The poem was an exposition of the wonder behind the material world, with subtleties of syntax conveying the meaning.

In the first interval, the Librarian, Mrs Jenny Blackhurst, gave some brief background about Caroline Mary Ridding to the audience.

The judges selected four of the eight contestants to proceed to round two, having been impressed by the overall very high standard in round one.

In the second round, the prose passage was an extract from Dusty Answer by Rosamond Lehmann, also a Girtonian . This is a bitter-sweet passage, vividly evoking the anxiety and loneliness of starting at university as well as some lighter aspects. The poem for the second round was “Look, stranger”  by W. H. Auden (not a Girtonian). This poem takes the reader into a world of light, sea and cliffs, with onomatopoeia and alliteration to relish, which all the contestants clearly enjoyed.  The contestants were then asked to read an unseen poem, with two minutes to prepare: “A Nocturnal to Poetry”  by Oliver Fraser, who had also studied at Girton though graduated from Aberdeen.

Having come close to requiring the services of the tie breaker, the judges after lengthy and lively discussion chose the winner, Simon Weppel. Simon showed great depth of understanding of all the passages, and a wide variety of reading styles appropriate to the different texts.

Our thanks go to all those who competed, and to everyone who contributed to making the evening enjoyable and a resounding success. The Committee would like to convey many congratulations to the winner.