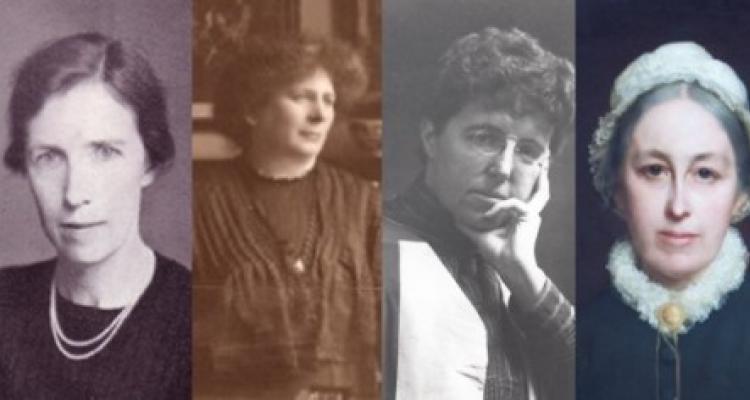 The official opening of Swirles Court will take place on Saturday 14 October, a special plaque will be unveiled by the new Vice-Chancellor of the University of Cambridge, Professor Stephen J Toope.

Swirles Court is named after the Girtonian mathematician Bertha Swirles, but this not the only impact the College is having on the local area geographically. A further seven Girtonians have been selected by the local community to give their names to streets, neighbourhoods, and buildings on the Eddington site as it grows. A full list can be found on the Varsity website.

Here is a little more information about these extraordinary Girton Alumnae:

Sarah Phoebe (Hertha) Ayrton (Marks) first came up to Girton in 1876 to study Mathematics. She later turned to Physics and made a number of important discoveries. In the late 1800s electric arcs were widely used in public lighting but the fact that they flickered and hissed was a serious problem; Hertha's remarkable investigations into the relationship between the length of the arc and the pressure in the surrounding gas and the voltage used allowed significant improvements in the design of electric arcs to be made. She also discovered the causes of, and mechanism for, the formation of sand-ripples on the seashore, and invented an anti-gas fan, of which over 100,000 were used during WWI to protect troops. In 1899 Hertha was elected to become the first woman member of the Institution of Electrical Engineers, and in 1906 she was awarded the Hughes Medal of the Royal Society for her work. The Hertha Ayrton Science Fellowship was founded at Girton in 1925 in her memory.

Professor Muriel Bradbrook, fourteenth Mistress of Girton (1968-76), was a literary scholar and an authority on Shakespeare. In all Professor Bradbrook wrote over fifteen academic books, received numerous honorary degrees from institutions around the world and was appointed as the first female Professor in the Faculty of English at the University of Cambridge in 1965. In 1969 she wrote a history of Girton under the ironic titleThat Infidel Place.

Dame Mary Lucy Cartwright was the thirteenth Mistress of Girton. She was a renowned pure mathematician, who worked on complex function theory, and, in wartime and thereafter, on nonlinear differential equations, making contributions which led to the development of chaos theory. This subject has had many applications, from weather forecasting to the study of coffee futures. Such was her standing in the mathematical world that Dame Mary was elected to a Fellowship of the Royal Society in 1947, a mere two years after the Society was opened to women, and she became the first woman to serve on its Council. In 1949 she took up her appointment as Mistress of Girton College, a post she held until 1968, the longest tenure in the College's history.

Emily Davies was the leading figure in the campaign to open higher education to women in Britain. It was her vision and tenacity that led to the founding of Girton College, the first residential college in the country offering women a university education. She later served as the fourth Mistress of Girton (1871-1874). Determined that women should have the same educational experience as men, Emily demanded that the women follow the same curriculum and petitioned the Senate to allow women to sit the Tripos exams officially. The Senate initially rejected her proposal (it was not until 1881 that women could officially sit the exams) but Davies insisted the women were taught the full curriculum in any case.

In addition to her role championing women's education Miss Davies was a dedicated supporter of the women's suffrage movement. In 1866 she was heavily involved, alongside one of the other Girton founders, Barbara Bodichon, in organising the 1866 petition to Parliament, that marked the start of the organised campaign for votes for women in Britain.

Joan Violet Robinson (Maurice) matriculated in 1922 to read Economics. She had studied history but chose to read for the Economics Tripos at Cambridge because she wanted to understand the causes of poverty and unemployment. Her story is intricately entwined with the story of Cambridge economics in the twentieth century, taking in major changes in the way economics was thought about, executed, and taught - changes which Joan Robinson and her circle, the first generation of what may loosely be called Keynes‚Äô pupils, were instrumental in advancing, from the 1920s until well into the post-war years. A very large part of her post-war writing was concerned with development issues. During her life Robinson sought to find, perhaps help to create, a more just and equitable society than the ones she had grown up and lived in.

Charlotte Angas Scott matriculated in 1876 to read Mathematics. In 1880 she received special dispensation to take the Mathematical Tripos exam (women were usually not permitted do so at the time) where she came eighth overall and was the first female Wrangler (that is, she was placed in the First Class). Due to her gender, however, the title of Eighth Wrangler was officially given to a male student.

During the ceremony to announce the Wranglers the audience shouted Charlotte's name after the Seventh Wrangler had been announced.

"The man read out the names and when he came to 'eighth,' before he could say the name, all the undergraduates called out 'Scott of Girton,' and cheered tremendously, shouting her name over and over again with tremendous cheers and waving of hats."

Charlotte's success together with that of other women in other subjects led to formal admission of women to Tripos examinations in 1881. Scott herself become a Resident Lecturer in Mathematics at Girton and in 1885 she became the first British woman to receive a doctorate.

Lucy Joan Slater matriculated in 1951 to do a PhD in Mathematics working on hypergeometric functions. Her research was based in the Cambridge Computer Laboratory, where she worked on EDSAC, the first operating programmable electronic computer. Subsequently Dr Slater took up a post as a Junior Research Officer at Cambridge's newly formed Department of Applied Economics and later became a Fellow of Newnham College. Her research helped to develop computer programs for econometrics providing calculations for the Project for Growth in the British Economy which was a large research project that until 1987 was used to forecast economic growth in the UK.

Bertha Swirles (Lady Jeffreys) matriculated in 1921 to read Mathematics before becoming a research student and then the Hertha Ayrton Research Fellow, receiving her PhD in 1929. Her research focussed on quantum theory, a field then in its infancy, and led to lectureships in Manchester, Bristol and then Imperial College, London. In 1938 Lady Jeffreys returned to Girton College to take up the post of Fellow and Lecturer in Mathematics and remained closely associated with the College until her death in 1999. She continued to publish important papers on quantum theory, but her most widely known publication is the influential text Methods of Mathematical Physics, written with her husband Harold Jeffreys. It was first published in the 1940s and is still a recommended text for several Cambridge undergraduate mathematics courses today.