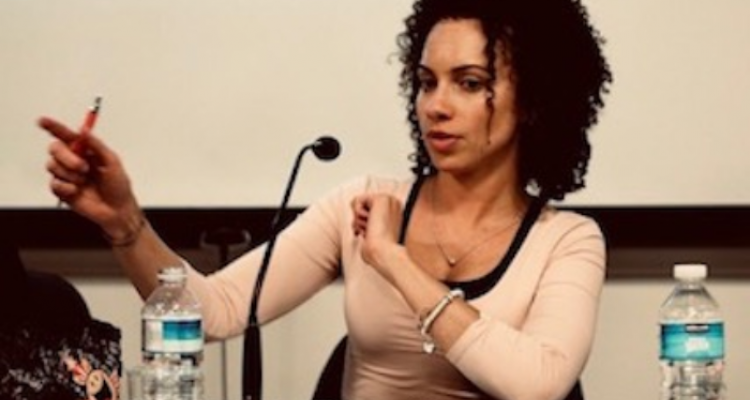 As the case for women’s full and fair participation in political, professional and public life gathered pace in the late 19th century, through the fearless voice and dogged determination of Emily Davies and Barbara Bodichon, Girton College was founded in 1869 as the first residential institution offering degree-level education for women in the UK Coincidently, as Girton College steps into 2019 ready to celebrate the 150th anniversary of this pioneering bid for inclusion and widening participation as well as empowerment and emancipation for women, we are leaving behind the year when we revisited many ideas, concepts and utopias related also to emancipation, empowerment and freedom due to Marx’s 200th birthday.

One of my contribution to the 200th birthday celebration of Marx was to look at the developments and influences of Marx and Marxism in Latin America, which can be traced back to the Third International and the ideas of radical changes and transformation of capitalism. These ideas are a common feature of the so-called Latin American Marxism, and they are very often synonym of ‘national liberation’.

It was not until the 1960s when the idea of Latin American Marxism as a subject of investigation started. In the late 1970s, José Aricó (Argentine intellectual influenced by Antonio Gramsci) and Michael Löwy (French-Brazilian Marxist sociologist and philosopher) offered the initial contours of this investigation. For both, Aricó and Löwy, the Peruvian author José Carlos Mariátegui (1894 – 1930) is the major theoretical event for Marxism in the ‘sub-continent’.

Authors engaging in this intellectual exercise usually face, for example, obstacles regarding the possibility of talking about an entity ‘Latin America’, and the predominance of national and local varieties of Marxisms. Looking at a common and less-controversial shared aspect, however, it is the emancipatory contributions made by Marx and Marxism to approach the realities of Latin America at the beginning of the 20th century that marks the influence and the initial contact of Marx with this region. Here the contributions do not belong to the realm of hard facts or just theoretical analyses, but the idea of interpretation and interruption of the social, the factual normality, considering the uprisings of the workers. It is this aspect of Marxism that captivated and co-opted radical thinkers and activists in Latin America.

That is why the Third International (1919-1943) under Lenin, when the anti-capitalist struggle is clearly merged with anti-imperialism, is key for the ‘Third World’. From this moment onwards, Marxism opened a new path to social movements, and socialism, in this region, attracting workers, peasants and intellectuals, which was, according to Ali (2017), desirable for the Third International as well.

In this sense, Marx and Marxism in Latin America “strictly speaking are neither philosophical worldviews nor positive sciences, but rather intervening doctrines of the subject respectively in political clinical-affective situations” (Bosteels, 2012, p. 23). The theoretical discussion that becomes prominent here is Marx’s ambiguous views on how, within capitalism, imperialism can transform more backward societies, despite its brutal and disruptive outcomes. One can argue that, according to Marx, the development of capitalism in Western Europe, the United States and the ‘Third World’ would lead them to socialism. However, in Imperialism, the highest stage of capitalism, Lenin (2010) not only points out that the monopoly capitalism needs foreign expansion due to free-market capitalism becoming “decrepit”, but also that increase in wages and overall material improvement of the working class in developed countries reduce the class conflict and lead workers to abandon the revolutionary path to embrace nationalistic social-democratic parties. Imperialism, therefore, may very well undermine class struggle and obfuscate the revolutionary potential in backward societies.

With Lenin, the struggle against imperialism becomes undissociated from the broad struggle against capitalism. But, in particular, imperialism is no longer the driver, the engine, that leads to socialism. On the contrary, it is one of the worst features of predatory capitalism. This has far-reaching consequences for the thinking of the Latin America left. The Third International, the anti-imperialism, the independence movements and the appeal to socialism as an alternative for many of the countries in the region, were undoubtedly forces that contributed to taking Marx to faraway lands, despite Marx’s ambiguous views in that respect.

Marx entrance in Latin America is further convoluted by the lack of continuous dialogue between the works of Marx and the realities of the region. According to Aricó (2015), Marx had an inability to approach the realities of Latin America. For example, in a letter to Engels in February 14 1858, Marx described Simon Bolivar as “the most miserable and meanest of blackguards”. Both Marx and Engels supported the US invasion of Mexico in a letter from December 2 1854. Interestingly, Aricó attributes these views to Marx and Engel’s intimately related prejudices, i.e.,

“belief in the linearity of history; a generalised anti-Bonapartism; and a theory of the nation-state inherited, albeit in inverted form, from Hegel, according to which there cannot exist a lasting form of the state without the prior presence of a strong sense of national unity at the level of bourgeois civil society—a sense of unity and identity whose absence or insufficiency, on the other hand, tends to provoke precisely the intervention of despotic or dictatorial figures a la Bonaparte and Bolivar” (Bosteels, 2012, p. 6).

Marx’s writings on the British conquest of India and Engels’ writings on the French conquest of Algeria, for example, are texts where, albeit sometimes ambiguously, both authors argue that all countries must necessarily pass through the same process of political and economic development in the formation of a civil society sufficiently strong to support the apparatuses of the state.

The association of these prejudices to Marx is in itself an endless source of debate, which beyond the scope of this piece [Linera‘s (1991) work, for example, challenges Aricó’s ‘prejudice thesis’]. What is important here is, however, that at the end of the 1870s, Marx started discussing the logic of the uneven development of capitalism in his texts on Ireland, Poland, Russia and India. What’s more, “from the end of the decade of the 1870s onward, Marx never again abandons his thesis that the uneven development capitalist accumulation displaces the centre of the revolution from the countries of Western Europe to dependent and colonial countries” (Bosteels 2012, p. 7). Henceforth, for both Bosteels and Aricó as well, Marx “acknowledges the possibility that so-called backward, dependent or colonial countries socialism may come about through a retrieval of pre-capitalist forms of communitarian production in superior conditions” (Bosteels, 2012, p. 7).

Marx’s tardy discovery of the logic of uneven development is a paradigm shift in his thoughts that would open new venues “for the analysis of the conflicted problem of the relations between the class struggle and the national liberation struggle, that genuine punctum dolensin the entire history of the socialist movement” (Aricó, 2015, pp. 65-68). It seems likely that this shift could have served Marx well to reinterpret the postcolonial condition in Latin America, as argued by Bosteels (2012). However, for Aricó, Marx is still unable to settle his accounts with Latin America, failing to re-evaluate the revolutionary role of these countries critically. The reason for this failure/inability is due, according to Aricó, to the stubborn persistence of Marx’s anti-Bonapartist bias his unwitting fidelity to the legacy of Hegel’s theory of civil society and the state.

For the reasons above, at the centre of the influence of Marx and Marxism in Latin America, is the complexity and ambiguity of Marx’s work and its interpretations around the thorny question of the so-called national liberation, at the theoretical and political practical level. Crespo (2015) grasps this complexity arguing that Marx and Engels’ various texts on Latin America show

“the real historiographical dilemma presented by the debate in the character of the wars of independence, the original path taken in the constructions of new states that arose from Spanish America, caudillismo, the engulfment of precapitalist society by the relations of an expanding capitalism, the birth of the modern imperialism and the dialectic between the central capitalist countries and the dependent and colonial periphery” (Crespo, 2015, pp. ix-x, Introduction to Aricó’s Marx and Latin America)

Portantiero (1978) account of the debate over the strategies for revolutionary transformation in the late 1920s between the Peruvian politician and philosopher Victor Haya de la Torre and the Cuban communist Julio Antonio Mella reveals the tension that emerges out of Marx’s own ambiguities regarding Latin America and the diverse interpretation of his work in the region.

“The polemic from which we begin bears significant witness to the ideological struggle in Latin America; documentary proof of the difficulties faced in articulating a way of thinking able to synthesise the national-democratic problems the Latin-American revolution within a socialist perspective… If Haya and Aprismo, as an expression of the anti-imperialism of the middle-classes, in and stressing the national question left until an unspecified future the possibilities socialist transformations, then Mella and the Communist Parties underestimated this initial national-democratic moment in projecting its practical tasks onto an imagined ‘pure’ socialist revolution” (pp. 97-98)

Mariátegui’s Marxism can also be placed in the context of ambiguities in the foreseen paths of capitalist modernisation seen in Marx and Lenin. Interestingly, one can argue that in Mariátegui’s formulation of the dialectics between national and international dynamics there is the presence of uneven and combined development, on the one hand, and of the autonomous and the cosmopolitan elements of a socialist project, on the other. Here, Mariátegui’s political revolutions also envisaged the theoretical encounter of Marxism with an indigenous revolutionary rationality, an encounter that adumbrated the idea of an ‘Indo-American Socialism’.

The ‘dependency hypothesis’ and the question about the possibility for coming to terms with the particular law of (under) development of Latin America’s capitalism, as formulated by important exponents of the dependency school years after Mariátegui, reflect the convergences and dissimilarities between the framework of uneven and combined development and a socialist project as well. A close look at the debate between Brazilians Fernando H. Cardoso and Ruy Mauro Marini, for example, reconstructs and evidences this aspect.

More broadly, Marxist-inspired theories of structuralism and dependency make clearer that the issue national liberation is not the only particularity of Marx and Marxism in Latin America, the ideas of socialism and nationalism would often be at odds with one another in this context. The tension between these two ideas would lead to divides such as the one between dependency and structuralist theories, with the irreconcilable solutions for the backwardness of the continent, i.e., socialist revolution or industrialisation. Yet, both socialism and industrialisation were part of the political programmes of social transformation and national liberation in peripheral countries.

To sum up, the tradition of critical thought populating Marxism in Latin America is the result of both Marx’s ambiguous relation with Latin America and the different questions raised in the different epoch in this multi-faced region. The intellectual constellation of different interpretations of Marx’s work can easily be grouped around questions related to the character of capitalist modernity; the value and function of Marxist theory and of socialist projects; the dependence of Marxist theory on both economic and intellectual levels; the ill-resolved national and indigenous questions; and the development of class struggle.

Although one can argue that these questions are all-too-present issues elsewhere as well, in Latin America these are permeated by the role that a subaltern, decolonising perspective has for a truly emancipatory Marxist thinking. It is this emancipatory and revolutionary aspect that would attract radical third worldists, revolutionary syndicalists and activists in Latin America before any exegetical analysis of the Capital, through the notion of praxis, political revolution and the question of national liberation. This common guiding-thread can be identified in the colonial historical background that all these versions of Marxism sought to bring to the foreground so as to combat it.