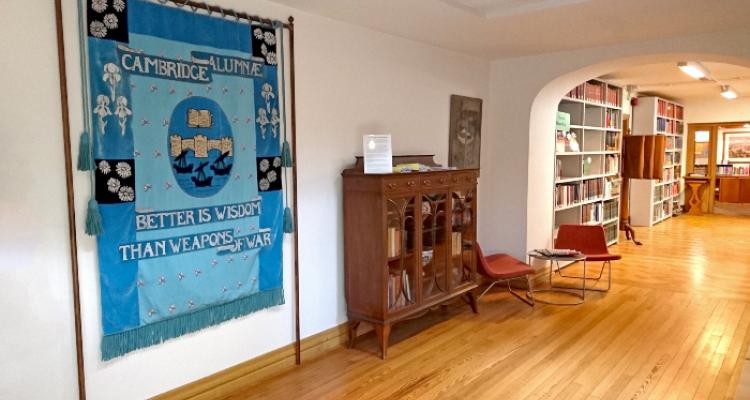 Girton College is delighted that an exact replica of the suffrage banner carried by Girton and Newnham alumnae in the National Union of Women’s Suffrage Societies’ procession on 13 June 1908 and in subsequent marches, is now on display in the Girton College Library.

This specially handcrafted replica was recreated by Girton Alumna, Annabel O’Docherty (1981 Anglo-Saxon, Norse and Celtic), is a specialist in historical dress and a professional theatrical costume maker. The new banner was presented to the College by Annabel O’Docherty at the Ceremony for the Commemoration of Benefactors and Foundation Dinner on Saturday 13 October 2018. Girton thanks all those alumni who supported this project.

Girton has always been at the forefront of political and social movements for the advancement of women in society. Barbara Bodichon (1827–1891) and Emily Davies (1830–1921), leading founders of the College, were key figures in the mid-19th century campaign for women’s suffrage before stepping aside to concentrate on women’s access to higher education – the foundation of Girton. After 1900 the British suffrage campaign gained new momentum. Large suffrage societies, both constitutionalist and more militant, made suffragism a genuine mass movement. Suffrage societies were founded in Girton and Newnham, and together students from both Colleges designed and worked on the Cambridge Alumnae Banner. In 1918 women over 30 gained the national vote (provided that they were on the local government electoral register or married to men who were). Aged 88, Emily Davies was one of those able to vote for the first time. In 1928 women finally won the vote on the same basis as men, though they were not allowed to receive their degrees from the University of Cambridge, until 1948.