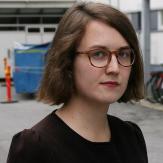 Sofia Singler (MA Cantab, MArch) is an architect and Gates Cambridge Scholar from Jyväskylä, Finland, currently based at the University of Cambridge. Her research interests lie in the history and theory of modern architecture, with particular focus on ecclesiastical architecture, Nordic modernism and Alvar Aalto. Singler’s work on Aalto’s unrealised funerary chapels and cemeteries was exhibited at the Alvar Aalto Museum in 2015. Her current research on Aalto’s Church of the Three Crosses in Vuoksenniska, Finland (1955–58) aims to enrich scholarly understanding of the relationship between religion and modern architecture, and revise misleadingly uncomplicated assumptions concerning their mutual exclusivity.

Alongside architectural research, Singler maintains an active voice in literary scholarship in Finland. She specialises in architectural metaphors in modernist free-verse poetry. She has authored book chapters on the poetry of Eeva-Liisa Manner (Acta Semiotica Fennica, 2018) and Lassi Nummi (Athanor, 2016; Hai, 2012), as well as a research project on Saila Susiluoto and Mirkka Rekola (Academy of Finland, 2010).

Superb facilities in which to live and learn