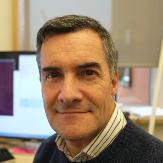 My research is within the Department of Computer Science most simply expressed as ‘the digital infrastructure of future cities’. The work looks at the appropriate architectures for real-time information flow in the city of the future, where we expect the effective density of ‘sensors’ e.g. for traffic, air quality, water, waste, power usage to be in the millions, each providing real-time data accumulating billions of measurements per year.  This provides the foundation of the Adaptive Cities Programme I lead in the Dept. of Computer Science, in which the city of the future is expected to adapt based upon this inflow of information. Examples would include the dynamic re-routing of traffic or the allocation of resources to mitigate potential power or waste issues. These adaptations will address issues the city is predicting are going to occur, rather than simply responding to direct measurements.

After completing my PhD in 1998, I took a computer science detour to Wall Street, returning to Cambridge and Girton in 2005, accepting the role of running the University’s Computing Service.  Since 2014 I have been based back in the Computer Laboratory directing the future cities work and working closely with the local regional authorities to establish digital infrastructure fit for our research in the region.